The Race Beat: The Press, the Civil Rights Struggle, and the Awakening of a Nation (MP3 CD) 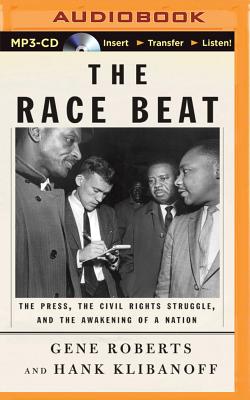 This is the story of how America awakened to its race problem, of how a nation that longed for unity after World War II came instead to see, hear, and learn about the shocking indignities of racial segregation in the South - and the brutality used to enforce it. It is the story of how the nation's press, after decades of ignoring the problem, came to recognize the importance of the civil rights struggle and turn it into the most significant domestic news event of the twentieth century. Drawing on private correspondence, notes from secret meetings, unpublished articles, and interviews, veteran journalists Gene Roberts and Hank Klibanoff go behind the headlines and datelines to show how a dedicated cadre of newsmen - first black reporters, then liberal southern editors, then reporters and photographers from the national press and the broadcast media - revealed to a nation its most shameful shortcomings and propelled its citizens to act. We watch the black press move bravely into the front row of the confrontation, only to be attacked and kept away from the action. Following the Supreme Court's 1954 decision striking down school segregation and the South's mobilization against it, we see a growing number of white reporters venture South to cover the Emmett Till murder trial, the Montgomery bus boycott, and the integration of the University of Alabama. We witness some southern editors joining the call for massive resistance and working with segregationist organizations to thwart compliance. But we also see a handful of other southern editors write forcefully and daringly for obedience to federal mandates, signaling to the nation that moderate forces were prepared to push the region into the mainstream. The pace quickens in Little Rock, where reporters test the boundaries of journalistic integrity, then gain momentum as they cover shuttered schools in Virginia, sit-ins in North Carolina, mob-led riots in Mississippi, Freedom Ride buses being set afire, fire hoses and dogs in Birmingham, and long, tense marches through the rural South. For many journalists, the conditions they found, the fear they felt, and the violence they saw were transforming. Their growing disgust matched the mounting country-wide outrage as The New York Times, Newsweek, NBC News, and other major news organizations, many of them headed by southerners, turned a regional story into a national drama.