It's the Little Things: Everyday Interactions That Anger, Annoy, and Divide the Races (Paperback) 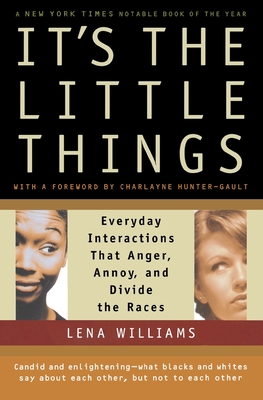 New York Times veteran Lena Williams candidly explores the everyday occurrences that strain racial relations, reaching a conclusion that "no one could disagree with" (The New York Times Book Review)

Although we no longer live in a legally segregated society, the division between blacks and whites never seems to go away. We work together, go to school together, and live near each other, but beneath it all there is a level of misunderstanding that breeds mistrust and a level of miscommunication that generates anger. Now in paperback, this is Lena Williams's honest look at the interactions between blacks and whites-the gestures, expressions, tones, and body language that keep us divided.

Frank, funny, and smart, It's the Little Things steps back from academia and takes a candid approach to race relations. Based on her own experiences as well as what she has learned from focus groups across the United States, Lena Williams does for race what Deborah Tannen did for gender. Finally, we have a book that traverses the color lines to help us understand, and eliminate, the alarmingly common interactions that get under the skin of both blacks and whites.

LENA WILLIAMS is a veteran of the New York Times. Her article "It's the Little Things" won the National Association of Black Journalists award for feature writing.

PRAISE FOR IT'S THE LITTLE THINGS
"Socially penetrating. . . . [This] should be put in every schoolchild's hand as soon as the youngster can understand it."-The Boston Globe
"A lighter discourse on the ultra-serious matter of race in America . . . A sounding board for blacks and whites concerned with bridging the racial divide."-Newsday
"The kind of reading that will make some black folks chuckle . . . A promising sort of harmony that's especially impressive."-The African Sun Times
"Sassy and informative, It's the Little Things lets blacks and whites walk a mile in each others' shoes."-The Christian Science Monitor